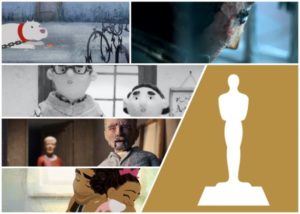 “The nominees (3 of the 5 were directed by women, and a fourth credits a female producer) hail from different countries, and they apply a vast array of animation styles and sensibilities nothing like the Best Animated Feature contenders, all of which were released by major studios.” – Indiewire.

The program includes: “Daughter” (Czech Republic), about a daughter who recalls a childhood moment when as a little girl she tried to share her experience with an injured bird with her father; “Hair Love” (USA), a heartfelt story centering around the relationship between an African-American father, his young daughter, and the most daunting task a father could ever come across—doing his daughter’s hair for the first time; “Kitbull” (USA), revealing the unlikely connection that sparks between two creatures: a fiercely independent stray kitten and a pit bull in S.F.’s Mission District; “Mémorable” (France), about a painter who begins experiencing strange events—slowly, furniture, objects and people lose their realism, sometimes disintegrating; and “Sister” (China/USA), a shocker in which a man thinks back to his childhood memories of growing up with an annoying little sister in China in the 1990s. The program also includes the prize-winning shorts: “Henrietta Bulkowski” (USA, 16 mins., featuring the voices of Chris Cooper and Ann Dowd!); “The Bird and the Whale” (Ireland, 6 mins.) and “Hors Piste”(France, 5 mins).