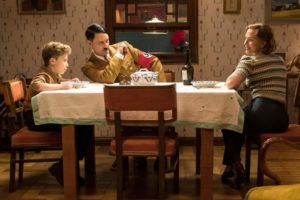 An enchanting, whimsical satire about the absurdity of war as seen through a child’s eyes, “Jojo Rabbit” doubles as an important film about the need for understanding in a divided world. In addition to writing and directing the sharp, colorful comedy, Taika Waititi stars as a buffoonish version of Hitler, the imaginary friend of 10-year-old Jojo (the wonderful Roman Griffin Davis). It’s the waning days of World War II in Nazi Germany, and in his head, Jojo is dedicated to the idea of Hitler and joining the war alongside his fellow countrymen.

In reality, he wouldn’t hurt a fly — or a rabbit.