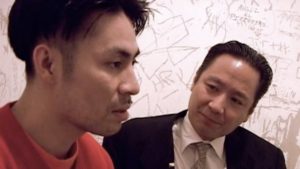 Still required viewing for new hires to the office that Adachi transformed into the envy of a nation and the pride of our city, Pamela Yates powerful documentary (produced by KQED!) goes behind the scenes to follow courtroom dramas & high-profile murder trails, revealing the triumphs, defeats and moral dilemmas of a group of lawyers whose emotional investment in the outcomes of their low-income, resource-strapped clients is nothing less than astounding. A cinematic anthem for the San Francisco Public Defenders Office, PRESUMED GUILTY also pays pitch-perfect tribute to a team led by Jeff Adachi, a dearly departed civic hero and an irrepressibly dogged crusader for the rights of the poor.

SPECIAL THANKS TO:
Pamela Yates, Skylight, and
the San Francisco Office of The Public Defender.

Follow Pamela Yates’ blog about the making of the documentary.

Preceded by Jeff Adachi’s short film RACIAL FACIAL . A vibrant collage of images & video – historical & contemporary – depicting both the division & blending that has characterized the history & treatment of people of color in this country. 8.5 mins.