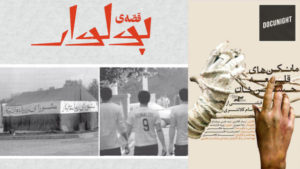 The Story of Boulevard

The Story of Boulevard is a documentary about Keshavarz Boulevard, one of Tehran’s important streets. The film is in effect a line-up of histories, events, and narratives of the place and it’s deep-rooted desires and contradictions waxing and waning, a course that makes Boulevard a collective belonging.

Davood Ashrafi is an independent filmmaker based in Tehran. A graduate of Cinema from the University of Art and a member of Khane Cinema. He worked for years in feature films as a camera assistant and is now a cinematographer. In his work, he is interested in the intersection between documentary and fiction film. His documentary The Story of Boulevard won the Art & Experience prize at the 11th Cinema Verite Festival and Best film with the focus of Tehran at Shahr 7th International Film Festival.

Directed by Davood Ashrafi. 2019. 40 min. In Persian with no subtitles.


The Mannequins of Ghale Hassan Khan

The Mannequins of Ghale Hassan Khan tells the story of the birth and life of some mannequins. They are all created in the same way but their faith is not the same.

Sam Kalantari, bornin 1976 in Tehran, is considered to be the fourth generation of Iranian documentary filmmakers. He began filmmaking academically the same time as he entered university to study civil engineering, he entered the realm of Iran’s professional filmmaking scene by making his first short film “The Unknown Desire” (Tamanaye Majhoul) in 2001. After completing his studies in Ireland, he entered the international realm of Iranian cinema as the director of films “from the House No.37” and “He”.

Directed by Sam Kalantari. 2015. 32 min. In Persian with no subtitles.