Roxie Theater: Come As You Are 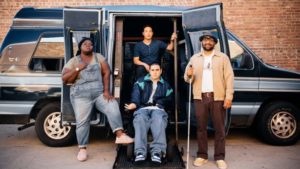 Inspired by a true story – three young men with disabilities flee their overbearing parents for a road trip to a brothel that caters to people with special needs, in order to lose their virginity and embrace their independence. Gabourey Sidibe stars as their nurse driver. Janeane Garofalo and C.S. Lee also star as concerned parents hot on their trail.

Come As You Are is a dark comedy meant to put a human touch on everyone’s longing for connection. With signature snappy dialogue and straight-faced humor, Bay Area filmmaker Richard Wong adds another hit to a buzz-worthy resume that already includes the cult hit Colma, The Musical.
The February 15th show will include a Q+A with the director after the show!