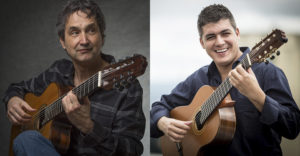 ABOUT THE ARTISTS:
Originally from Rio de Janeiro, guitarist, composer, and arranger Ricardo Peixoto came to the Bay Area by way of a scholarship to Boston’s Berklee College of Music. He has performed throughout the U.S., Europe, Canada, Japan, and Brazil with artists such as Claudia Villela, the Berkeley Choro Ensemble, Flora Purim and Airto, Paul McCandless, Bud Shank, Dom Um Romão, Sivuca, Toots Thielemans, Dori Caymmi, Guinga, Arturo Sandoval, and Terra Sul among others. His 2019 release, Scary Beautiful, received a DownBeat Editor’s Pick.

Julio Lemos is professor of music at the Federal University of Goias, Brazil, where he received a master’s degree in guitar. He is now working on his PhD at the Federal University of Rio Grande do Sul and at SF State. Lemos has performed in Brazil and throughout South America, Europe, the U.S., and China. His group Brasil in Trio released records in 2014 and 2019. The latter, Brasil in Trio interpreta Jarbas Cavendish, features Carlos Malta, Jarbas Cavendish, and Arismar do Espirito Santo. Lemos’ 2016 DVD includes guests Marco Pereira and Gabriel Grossi, and in 2019, he also released a CD of original compositions.