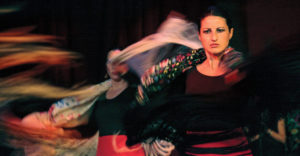 This evening will be a presentation of the end of a solo performance development program by La Tania. Flamenco is no easy challenge⁠—it’s an art that can fill a lifetime of exploration; it has no end, and its purpose is to find the path to our soul, to search for who we really are. This is a path that must be taken in little steps, carefully crafting our every move, with love, dedication, and attention to the subtleties. Six dancers, after many years of study, have embarked on the journey of developing their solo work through group classes and private instruction with La Tania. Tonight we will delight in their sharing of this experience and join them on their journey of self-expression and exploration. FEATURING: Sara Moncada – dance Claudia Bermudez – dance Claudia Deveze – dance Vannessa de Fabrega – dance Ana-Lucia Jardim – dance Mimi Wiener-Mishor – dance Roberto Zamora – vocals Roberto Aguilar – guitar ABOUT THE ARTIST: La Tania is a world-class dancer, choreographer, master teacher, and is the founder and director of La Tania Baile Flamenco Company & School. She was born in France and grew up in Andalucía, southern Spain, in the heart of flamenco culture where she began to learn flamenco dance at a very young age. By the age of 17, she was performing professionally in Mallorca and later made Madrid her base where she performed for years as a featured dancer in tablaos such as Corral de la Morería, Canasteros, Zambra, and Casa Patas. She toured internationally with many companies including Mario Maya Company, Compañia Raul, and Paco Peńa. In 1994, La Tania moved to the U.S. and since then toured with her company internationally, earning rave reviews from the Tokyo Times, Los Angeles Times, New York Times, San Francisco Chronicle, as well as awards such as the Guggenheim Fellowship, the California Arts Council Fellowship, the National Endowments for the Arts Fellowship, the James Irvine Fellowship in Dance, and the Isadora Duncan Dance Award twice for Artistic Excellence in the category of Individual Performance. In 2018, she was awarded with a sustained achievement award from the Isadora Duncan Awards. La Tania has collaborated with Alonzo King Lines Ballet, Theatre of Yugen, Opera Parallel, Rupa & The April Fishes, and Adrian Arias to name a few. Currently residing in Oakland, she teaches in San Francisco and Oakland all year round and has been a driving force in the Bay Area flamenco community since 1994. (Photo credit: Christine Fu)
+ Google Calendar+ iCal Export