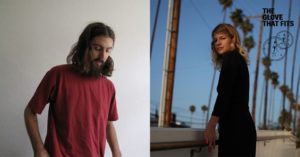 The Glove That Fits (London) & The Public Works SF present

Tornado Wallace
First blowing a gale as a forerunner of the new wave of Melbourne dance producers, Tornado Wallace’s distinct and perceptive electronics now find him in a constant rotation of both hemispheres, spending most of the year based in Berlin.

From formative house beginnings, the ESP Institute initiation “Thinking Allowed” proved Tornado Wallace as a force to be reckoned with – the driving groove and Will Powers stargazing quickly matched by an EP of eco-electro burners on Beats In Space. This two timing continued for another round with ESP issuing the elegant “Circadia”, while Beats In Space got their churning acid two-tracker “Kangaroo Ground/Ferntree Gully”.

In tandem, krautback duo Coober Pedy University Band was formed with Otologic’s Tom Moore, who he’d previously stirred up trouble with as fractions of C Grade and Animals Dancing – two long standing parties of undeniable impact on their hometown. Their trance inducing debut on Soft Rocks’ imprint Kinfolk recruited vocals from a lesser-known Chet Faker, followed by the bonkers 2014 anthem “Kookabura”.
>
Masha
“Hometown hero and a pillar of the L.A. rave fam” according to POOF, Serbian-born Angeleno Masha is the co-founder of Dig Deeper, a Dublab & NTS Radio host DJ, and 1/3 of LA’s newest super-group Surround & Dusk Campout. Whether the stage is megafestival huge, or an intimate room of dozens, Masha’s ability to deftly blend different genres and sound forms, has earned her a reputation of mixing the obscure with the familiar. Get ready to be seduced by Masha’s esoteric blend of sunny chuggers, italo-infused bangers, and all-around psychedelic dance euphoria.