Public Works: So It Goes & Safra with Mir Omar 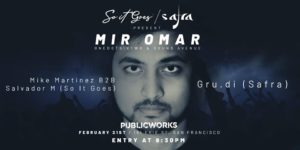 Join us Feb 21st, 2020 where So It Goes and Safra team up to bring you surging NY progressive house DJ and Producer Mir Omar for his debut at The Loft room at Public Works.

Mir Omar
Mir Omar is one of New York’s most notable electronic music artists, pioneering his own style of progressive house that focuses on emotional, dreamy compositions to take audiences on unforgettable journeys. Having first launched his music into the world with masterfully crafted remixes of Inertia’s ‘The System’ and Above & Beyond’s ‘Sun In Your Eyes’, Mir captured the attention of artists across the electronic music spectrum.

Now, releasing original material across labels such as Onedotsixtwo and Sound Avenue Mir continues his impact as a young producer with each outstanding release. His work has seen support from legendary artists like Hernan Cattaneo, Anthony Pappa, Nick Muir, Aly & Fila, Gai Barone and many more. With incredible attention to detail in his productions, each release cements Mir Omar’s place as one of America’s finest breakthrough talents.

As a performer, Mir’s progressive sound does not hold back on power. Deep, sultry, and moving, Mir’s sets create the perfect catalyst to intoxicate a crowd, whether he’s on warm-up, peak-time, or closing duties. Dynamic, driven, and drastically obsessed with performing as well as he can, Mir is no stranger to the club scene with appearances at legendary New York nightclubs throughout the years. Beyond the greater New York area, Mir has toured across the east and west coasts frequenting every major North American city.

Salvador M
Salvador M is a Deep, Progressive House DJ and the creator of So It Goes, a progressive house imprint based out of San Francisco which focuses on purveying and promoting the underground electronic music scene at a local and global level through Podcasts, Free Downloads, Premieres and Live Events. Salvador M began his journey as a DJ when discovering progressive house legends Guy J, Hernan Cattaneo, and John Digweed who are his biggest influences and inspirations So It Goes.

Mike Martinez
Mike Martinez is an up-and-coming Progressive House DJ based out of Oakland, California.Since 2014, artists and DJs like John Digweed, Guy J, Hernan Cattaneo, and Rory James have influenced Mike’s love for Progressive House and has since co-founded So It Goes as a platform to further grow the progressive house community, promote up-and-coming producers/DJs, and also evangelize deep and progressive house in the San Francisco Bay Area

Grudi
European, who recently came to the United States and got inspired with deep tribal dance music, incorporating folkloric sounds and ancient rhythms. Currently based in San Francisco Alec has been playing music for the past 3 years. Founder of “Safra” events where he and his music soulmates sharing downtempo, electronic and deep house music with Bay Area scene.