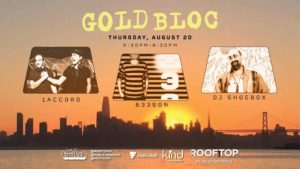 1Accord
House music has always had a unique power to bring people of all different races and sexualities together across otherwise rarely traversed socioeconomic lines and joining in unity to celebrate life. House music allows everyone to be on one accord. That’s what we love about it so much and that’s what we have decided to focus our project on – to bringing everyone together on one accord. Billy G. (aka PugLyfe) brings to the group his professional musical training and spearheads the group’s original productions. Fueling the fire with his dynamic stage presence, tastemaker PJ C. (aka Budu Khan) has been lighting up stages at SF’s premier venues with his infectious energy and eclectic track selection for the past 7+ years.


Dan Kennedy, otherwise known as dj shoebox, is an all-vinyl record selector and co-founder of Butter Vinyl Records, a mobile used record store and party that existed from 2008 to 2012 in Los Angeles. Since his move to the Bay Area in 2013, he has thrown annual and monthly Loft-style parties at classic San Francisco venues such as Club Waziema and the Peacock Lounge. Shoebox is a purist, and his parties are geared entirely toward the experience of his guests. His record collection reveals a predilection for the rhythmic, the rare, the oddly smooth and secretly special. As a purveyor of a wide range of musical styles, he believes that music is a vital essence of life through which all borders, rules, and limitations can be overcome. This is as true at weddings as at warehouse, in living rooms and live venues. Love is the message, and the message is in the music.

B33SON
B33SON is one of San Francisco’s top house DJs who has helped bring electronic to the mainstream. His party, EPR, is the largest weekly electronic show in Northern California.

In 2008, B33SON won the top prize in Remix Mag’s Digital DJ Competition with his 10 minute mini-mix performed live at EPR. Since then he’s traveled all over the country and as far as Bali, Indonesia to DJ. He’s played some of the largest parties in the US like etd.POP and LovEvolution (SF Love Parade).

Expect energy and excitement coming from the decks when he plays because he loves to see you moving on the dance floor.