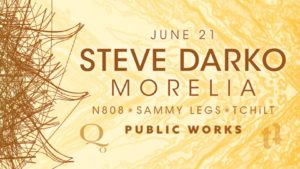 Inquiry makes its Public Works debut with event collaborator Eric Pratt hosting Steve Darko and Morelia’s first San Francisco performance. We have waited a long time to book Darko and are humbled to bring his intelligent, cheeky take on house & techno to one of the most esteemed venues in the city. Morelia is currently one of the hottest up-and-comers in the West Coast house community and we believe this pairing is a perfect combo to celebrate the longest day of 2019.

These fantastic selectors will be joined by SF’s own N808 (Dirtybird, Admit One) along with inquiry’s wackiest residents, Sammy Legs & TCHiLT. This will be one kooky, dirty dance floor and we cannot wait to share some wiggles with all of you.

Rising producer/DJ and likable human Steve Darko is a music nut from the underground scene in Boston. He got his start in music like most other American kids: picking up a bass and guitar and shredding the summer nights away before teaching himself production via FruityLoops. Following a short stint producing hip-hop beats and what he calls “shitty instrumental mixtapes,” he made the eventual jump to the dance floor after discovering electronic music.

Darko’s sound lives at the intersection of house and techno, where bouncy bass and technical grace live in sonic harmony. His unique style offers a fresh take on house: gritty low end, thick and sub-rattling bass, alien-like sounds and warped-out vocal samples. That winning formula has garnered him the attention and support from the top labels in electronic music, including Dirtybird.

Tanner Munn AKA Morelia, was born in Dallas, TX but also found homes in Denver and South Florida growing up. He now lives in Long Beach, CA and spends most of his time in the studio working on his craft. While Pursuing two personas, the other his empirical project by the name Mannequin, he is expanding the realm of his talent from experimental to house sounds. Tanner has been on a dance music journey since the age of 13, and now recently landing opportunities with companies such as Insomniac and Space Yacht, he is slowly but surely making a name for himself as Morelia. It is safe to say that Morelia has found a house driven bass sound that really connects with him and the audience. While recently starting the journey as a Label Head on his new imprint – Teethy, Morelia has been gaining momentum by releasing on labels such as Insomniac Records, Dirtybird, Box Of Cats, Psycho Disco!, Audiophile XXL, My Techno Weighs a Ton and Main Course Media and there are no signs of stopping for this 22-year-old.