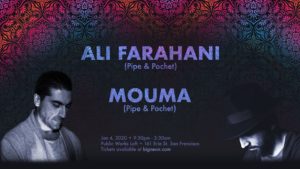 It’s long overdue but SF gets to finally enjoy the organic sounds of the electronic orient by none other than its pioneers Ali Farahani and Mouma, both representing Pipe & Pochet. Join us at The Public Works SF (Loft) on Jan 4 as we start this new year with an unforgettable night of music and dancing under the crescent moon’s love.

Ali Farahani (https://soundcloud.com/alifarahaniofficial)
Pipe & Pochet label founder and music producer Ali Farahani started his music career at 14 years of age as an Afro Cuban percussionist in Milan. Forward to the present and Ali is a pioneer of fusion music that converges electronic music with organic Middle Eastern sounds, reflecting his Iranian heritage. Currently based in LA, Ali’s music is played by some of the biggest artists in the scene. With Patrik Khach as the label’s co-owner, Pipe & Pochet supports a tribe of talented artists across the globe. Ali’s music will certainly sway you and leave you inspired.

Mouma (https://soundcloud.com/mouma)
Originally from Beirut, Mouma is a DJ and producer currently based in Dubai. His music takes you on a journey through slow house, where east meets west, tradition meets modernity. Mouma has just released the showtime album with Pipe & Pochet. You can listen here: https://soundcloud.com/pipeandpochet/sets/mouma-baso-showtime-album