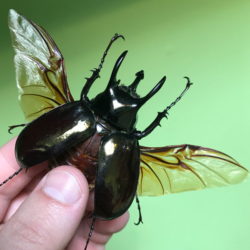 Proportionally one of the strongest creatures on the planet, the hulking Atlas Beetle is smashing its way to Paxton Gate. These horned beetles can lift 850 times their own body weight which would be the equivalent of a human picking up a delivery truck. Not only are they super “swoll”, they are natural born fighters. Their reputation for being fierce combatants is exemplified in their battles for mating rights. Males will often compete for the right to mate with a female leading to all at war. Even as larvae, the atlas beetle is ready for action as they have been known to bite. It is also known that larvae that live together will fight to the death if there is not enough space or food. Join us as we explore the savage world of Atlas Beetle in the most zen way possible.
+ Google Calendar+ iCal Export