Manny’s: The Politics of a Bridge: Director of the Golden Gate Bridge Denis Mulligan 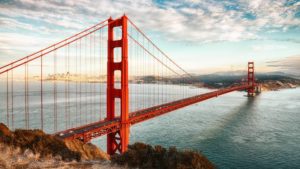 What is the place in civic life of the emblem of San Francisco, the Golden Gate Bridge. Who manages the bridge and how is it done?

The Golden Gate bridge is iconic. Is the main point of connection between San Francisco and the North. It is our route to escape, to the greener side of our State.

It is, in short, essential to what San Francisco is.

It is its own district. The Golden Gate Bridge, Highway and Transportation District is a special district of the State of California which operates and maintains the Golden Gate Bridge and two unified public transit systems – Golden Gate Transit and Golden Gate Ferry – connecting the counties of Marin, Sonoma, San Francisco, and Contra Costa.

Who manages the bridge? How is tolling decided? Where does the money go? What role does the bridge have in crafting and nurturing city and civic life? What are the politics of a bridge that connects the Bay and what does the future hold for the bridge? Why the delays on the suicide netting? How ready is the bridge for the Big One?

All this and more in our conversation with the General Manager of the Golden Gate Bridge Denis Mulligan.

Note : This is a part of our “The Civics of Transportation Series”. The next will be on BART in February.

More about Denis:
Denis J. Mulligan is General Manager and CEO of the Golden Gate Bridge, Highway and Transportation District. He leads a complex organization of buses, ferries, and the world’s most beautiful bridge.

With just under 850 employees, the District provides service to more than 50 million customers each year plus another 10 million tourists who visit the landmark Bridge each year.
Prior to becoming the General Manager in September 2010, Mr. Mulligan was the District Engineer for almost a decade, responsible for the engineering and construction works of the District. Before coming to work for the District he worked for Caltrans for over 18 years. A lifelong Bay Area resident, Mr. Mulligan has a Bachelors of Science degree in civil engineering from the University of California at Berkeley; and Mr. Mulligan is registered as a professional engineer in civil engineering in the State of California.