Manny’s: Stories from Growing up in the Pelosi Household with Christine Pelosi 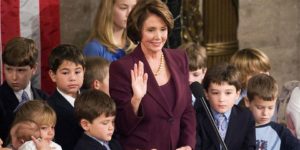 **Note: This conversation will be hosted digitally, not in the real live world.**

“I am never afraid and I am rarely surprised.” – Speaker of the House of Representatives, Nancy Pelosi 2019 for Politico
What is it like to be raised by the highest-ranking female elected official in U.S. history? What are the stories? The big family moments?

Let’s ask fellow San Franciscan and daughter of Speaker Pelosi, Christine Pelosi on what it was like growing up in the Pelosi household.

More about Christine Pelosi:
Pelosi is the daughter of Nancy Pelosi, a Democratic Congresswoman from California and former Speaker of the United States House of Representatives, and businessman Paul Pelosi. Among Christine’s siblings include environmental activist Paul Pelosi, Jr. and filmmaker Alexandra Pelosi.
Pelosi is the author of Campaign Boot Camp 2.0 and Campaign Boot Camp: Basic Training for Future Leaders’ (2007), books used in her leadership trainings for candidates and causes. She directs the AFSCME PEOPLE Congressional Candidates Boot Camp, which prepares Democrats for campaigns and has helped 26 challengers get elected to the U.S. House of Representatives. Her work in public policy and politics includes service as Executive Director (1998–99) and Platform Chair (1996–present) of the California Democratic Party; Deputy City Attorney (Construction and Trial Teams) and Assistant District Attorney (Sexual Assault and Child Abuse Unit) for the City of San Francisco; U.S. Department of Housing and Urban Development Special Counsel in the Clinton/Gore Administration (1999–2001); and, Chief of Staff to U.S. Representative John F. Tierney (2001–2005).

She holds a JD from the University of California Hastings College of the Law and a bachelor’s degree from Georgetown University’s Edmund A. Walsh School of Foreign Service. Christine Pelosi is also a superdelegate for the Democratic Party. Christine Paule Pelosi endorsed Senator Barack Obama on June 3, 2008, when he won the popular delegate vote.
An avid fan of baseball, she lives within walking distance of her beloved San Francisco Giants and serves on the Giants Community Fund board of directors.
She is married to filmmaker Peter Kaufman. They married on February 16, 2008 in San Francisco. The couple’s daughter was born in 2009.

About Manny’s Super Civic Cyber Conversation:
San Francisco and the surrounding 5 counties are in the midst of mandated shelter-in-place. All businesses except those deemed essential are closed and many Bay Area residents and scared, nervous, and wondering about the future.
Manny’s, a civic gathering and events space located in the heart of San Francisco, is rising to the occasion to create and promote a month’s worth of live civic conversations to distribute needed information, give people the hope, and continue to civically engage the public in a time of need.

About Manny’s:
Manny’s was opened on election night 2018 to create a physical place for people to go to become better informed and more involved citizens. Since opening we’ve hosted 17 of the Presidential candidates, over 550 civic events, talks, and gatherings, over 40 members of Congress including Speaker Nancy Pelosi, and leaders across different social justice movements like Alicia Garza, Jose Antonio Vargas, Michael Brune, Cleve Jones, and Gabby Giffords.