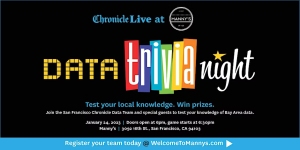 Think you know the Bay Area? Do you know which county in the region has the most people? How about the number of rainy days San Francisco gets in a typical year?

We challenge you to come to The San Francisco Chronicle’s first ever Bay Area Data Trivia Night on January 24th at Manny’s . Hosted by The Chronicle’s Data Team, this won’t just be any trivia night. The winners of our quiz will have to know the numbers that explain San Francisco, the Bay Area and its surroundings.

Among other topics, you will be tested on your stats knowledge of the region’s demographics, politics and sports. We will also have a few guest trivia masters from The Chronicle newsroom, including Chronicle columnist and culture critic Peter Hartlaub, to test your quantitative knowledge of their areas of expertise.

Teams of anywhere from two to six can compete, with prizes going to the top three teams, including an announcement in the S.F. Chronicle pronouncing the winners as the “Bay Area’s Top Data Nerds.” Let the data games begin!