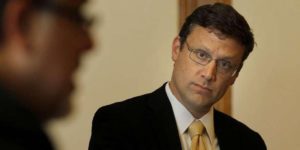 Ok so what is a City Controller anyway? What do they control? The money of the City. Seems pretty important right? It is! But have you met the Controller? Do you know their name? Do they know you? Well now they can! As a part of our monthly local leaders leader we are bringing San Francisco’s Controller to Manny’s to answer your question about the finances of the City. Ben provides fical oversight over the $11 billion City budget and how that budget is used is more important now than ever. Some questions I have are: so how much do actually spend combating homelessness, is $11 billion for a City our size normal? What’s the biggest expenditure? How is the budget built and decided upon? Who gives input? But what are your questions? Come by! More about Ben below: Ben Rosenfield serves as the City Controller. Mr. Rosenfield was initially appointed to a 10-year term as Controller by Mayor Gavin Newsom in Spring 2008 and re-appointed to a second term by Mayor Mark Farrell in Spring 2018. Each appointment was confirmed by the Board of Supervisors, as required by the Charter. Mr. Rosenfield succeeded Edward Harrington as the Controller, following Mr. Harrington’s appointment to the position of General Manager of the San Francisco Public Utilities Commission in 2008. As Chief Fiscal Officer and Auditor, he provides fiscal management oversight of a $11 billion budget and is responsible for budgetary planning and monitoring of the receipt, collection and disbursement of City funds. The City Controller is responsible for the City’s financial management systems, internal controls and reports, provides public policy and economic analyses, estimates the cost of ballot measures, provides payroll services for the City’s employees and directs performance and financial audits of City activities. Before becoming Controller, Mr. Rosenfield served as the Deputy City Administrator under City Administrator Edwin Lee from 2005 to 2008, during which time we charged with the preparation of the City’s first 10-year capital plan and oversight of the implementation of the City’s 311 non-emergency customer service center. From 2001 to 2005 Mr. Rosenfield worked as the Budget Director for Mayor Willie L. Brown, Jr. and Mayor Gavin Newsom. As Budget Director, Mr. Rosenfield prepared the City’s proposed budget for each fiscal year and served on behalf of the Mayor to manage city spending during the course of each year. From 1997 to 2001 Mr. Rosenfield worked as an analyst in the Mayor’s Budget Office and as a project leader in the Controller’s Office. During his time as Controller, Mr. Rosenfield has worked with policymakers on a number of initiatives to improve management of the City’s finances. He has supported the development of voter-approved ballot measures to revise the City’s financial planning processes, shift the City to a two-year budget, and better manage retiree pension and healthcare costs. He supervised the development of complex financings required to expand the City’s Moscone Convention Center, complete construction of the Transbay Transit Center, and restructure the Asian Art Museum’s strained debt portfolio. During his term, the Controller’s Office has replaced the City’s legacy payroll & benefits systems and is underway with the replacement and modernization of the City’s financial and procurement systems. He has participated in the preparation and review of the last twenty City operating budgets during his career with the City. Ben lives in the City with his wife Vivien and two young daughters, Sofia and Lilah.
+ Google Calendar+ iCal Export