Manny’s: Dolores Huerta on 2020 Census & Supporting Farmworkers During this Crisis 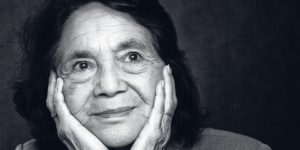 **Note: This conversation will be hosted digitally, not in the real live world.**

Dolores Huerta is President and Founder of the Dolores Huerta Foundation (DHF) and Co-Founder of the United Farm Workers of America. She is a celebrated Latina labor leader, activist and community organizer. She has worked for civil rights and social justice for over 50 years. In 1962, she and Cesar Chavez founded the United Farm Workers union where she served as vice-president and played a critical role in many of the union’s accomplishments for four decades. Her endeavors to protect the rights of the most vulnerable has earned her a place in history. She is one of the most well known and accomplished civic rights activists in the country and she continues to fight hard for the communities she represents.

Ms. Huerta will be closing out our month of Manny’s Super Civic Cyber Conversations with a discussion on the 2020 census, the state of farmworkers during this time, and how to support them. This is not a conversation to be missed.

More about Dolores Huerta:
Dolores Clara Fernández Huerta is one of the most influential labor activists of the 20th century and a leader of the Chicano civil rights movement.

Born on April 10, 1930 in Dawson, New Mexico, Huerta was the second of three children of Alicia and Juan Fernandez, a farm worker and miner who became a state legislator in 1938. Her parents divorced when Huerta was three years old, and her mother moved to Stockton, California with her children. Huerta’s grandfather helped raise Huerta and her two brothers while her mother juggled jobs as a waitress and cannery worker until she could buy a small hotel and restaurant. Alicia’s community activism and compassionate treatment of workers greatly influenced her daughter.
Discrimination also helped shape Huerta. A schoolteacher, prejudiced against Hispanics, accused Huerta of cheating because her papers were too well-written. In 1945 at the end of World War II, white men brutally beat her brother for wearing a Zoot-Suit, a popular Latino fashion.

Huerta received an associate teaching degree from the University of the Pacific’s Delta College. Huerta briefly taught school in the 1950s but she could no longer bear to see her students come to school with empty stomachs and bare feet, and thus began her lifelong journey of working to correct economic injustice.

In 1955 Huerta began her career as an activist when she co-founded the Stockton chapter of the Community Service Organization (CSO), which led voter registration drives and fought for economic improvements for Hispanics. She also founded the Agricultural Workers Association. Through a CSO associate, Huerta met activist César Chávez, with whom she shared an interest in organizing farm workers. In 1962, Huerta and Chávez founded the National Farm Workers Association (NFWA), the predecessor of the United Farm Workers’ Union (UFW), which formed three year later. Huerta served as UFW vice president until 1999.
Despite ethnic and gender bias, Huerta helped organize the 1965 Delano strike of 5,000 grape workers and was the lead negotiator in the workers’ contract that followed. Throughout her work with the UFW, Huerta organized workers, negotiated contracts, advocated for safer working conditions including the elimination of harmful pesticides. She also fought for unemployment and healthcare benefits for agricultural workers. Huerta was the driving force behind the nationwide table grape boycotts in the late 1960s that led to a successful union contract by 1970.

In 1973, Huerta led another consumer boycott of grapes that resulted in the ground-breaking California Agricultural Labor Relations Act of 1975, which allowed farm workers to form unions and bargain for better wages and conditions. Throughout the 1970s and ‘80s, Huerta worked as a lobbyist to improve workers’ legislative representation.
During the 1990s and 2000s, she worked to elect more Latinos and women to political office and has championed women’s issues.

In 2002, she received the Puffin/Nation $100,000 prize for Creative Citizenship which she used to establish the Dolores Huerta Foundation. DHF connects community-based organizing to state and national movements to register and educate voters; advocate for education reform; bring about infrastructure improvements in low-income communities; advocate for greater equality for the LGBT community; and create strong leadership development.
Huerta was married twice and had a long term relationship with Richard Chavez, the brother of César. She has 11 children and many grand and great-grandchildren. Most of her children have dedicated themselves to public service.
Dolores is a two-time US Presidential Award Recipient. She received the Medal of Freedom Award from President Obama in 2012, the highest civilian award in the United States, and the Eleanor D. Roosevelt Human Rights Award from President Clinton in 1998.

About Manny’s Super Civic Cyber Conversation :
San Francisco and the surrounding 5 counties are in the midst of mandated shelter-in-place. All businesses except those deemed essential are closed and many Bay Area residents and scared, nervous, and wondering about the future.

Manny’s , a civic gathering and events space located in the heart of San Francisco, is rising to the occasion to create and promote a month’s worth of live civic conversations to distribute needed information, give people the hope, and continue to civically engage the public in a time of need.

About Manny’s :
Manny’s was opened on election night 2018 to create a physical place for people to go to become better informed and more involved citizens. Since opening we’ve hosted 17 of the Presidential candidates, over 550 civic events, talks, and gatherings, over 40 members of Congress including Speaker Nancy Pelosi, and leaders across different social justice movements like Alicia Garza, Jose Antonio Vargas, Michael Brune, Cleve Jones, and Gabby Giffords.