Gray Area Grand Theater: To Hear the Earth Before the End of the World (Act I-iii ; Earth and Sky) 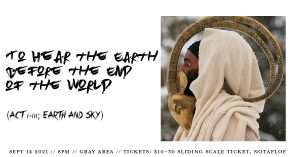 To Hear the Earth Before the End of the World (Act I-iii ; Earth and Sky)
Details
Date: 9/14/2021
Hours: 8pm doors
830pm show
~11pm close
Tickets: $10-30 sliding scale ticket, NOTAFLOF
In collaboration with our friends at Gray Area, Soundwave is thrilled to present To Hear the Earth Before the End of the World (Act I-iii ; Earth and Sky), a 60min sound journey by LaMont Hamilton featuring improvised movement by artist brontë velez.
The title is an alternate phrasing on poet Ed Roberson’s book To See the Earth Before the End of the World. Over the past years, artist LaMont Hamilton has been collecting biodata — field and electromagnetic recordings — from around the world to gain “a ground zero understanding of our changing Earth.” Hearing glaciers cracking, smelling forest fires, the mechanical cacophony of land being razed — all felt on a cellular level.
“Music is the healing force of the universe.” Healing is the future of sound. Conversely, sound has also been used as a method of warfare, of manipulation, destruction. Thus the lines have been drawn. To echo Anthony Braxton, “a re-examination of our experience in this realm” is now in order. Understanding this is to understand our smallness in the equation, our finitude. Reckoning with that smallness is a necessary preparation for the voyage this work hopes to achieve.
This show includes a guest performance by local legend Zachary James Watkins with the piece titled “High Vibrations” – My art investigates the rich area of resonance and is dependent on collaboration with practitioners in all disciplines. Works attempt to manipulate experiences and immerse the senses bringing to the fore natural phenomenon. I believe that sound can heal and that the conscious investigation of harmonic tunings, acoustic resonance as well as social relationships can yield powerful experiences. Therefore, sound works often begin with the exploration of pure interval relationships for resonant systems. These tunings investigate whole number pitch ratios known as just intonation. I create tunings based on desires to explore new harmonic territory, periodicity, composite waveforms, resonance and texture. It is my affinity for rich timbres that informs many aspects of my music. I explore the harmonic series, live electronics, site-specific resonant spaces and the spatial diffusion of sound to achieve rich, saturated environments.
. Get your tickets asap at : https://grayarea.org/…/lamont-youngs-to-hear-the-earth…/
Featuring works by
1)LaMont Hamilton
LaMont Hamilton (b. 1982) is an interdisciplinary artist based in New York. Hamilton has been the recipient of several fellowships and awards including the Jerome Hill Artist Fellowship, MacDowell Colony (MF ’15), Smithsonian Artist Research Fellowship, Artadia Award, ArtMatters Grant and more. His residencies include Skowhegan, Camargo Foundation in Cassis France among others.
https://www.lamonthamilton.com/
2)brontë velez
brontë’s work and rest is guided by the call that “black wellness is the antithesis to state violence” (Mark Anthony Johnson). as a black-latinx transdisciplinary artist, designer, trickster, and wakeworker, their eco-social art praxis lives at the intersections of black feminist placemaking & prophetic communiy traditions, environmental justice, and death doulaship.
3)Zachary James Watkins
Zachary James Watkins studied composition with Janice Giteck, Jarrad Powell, Robin Holcomb and Jovino Santos Neto at Cornish College. In 2006, Zachary received an MFA in Electronic Music and Recording Media from Mills College where he studied with Chris Brown, Fred Frith, Alvin Curran and Pauline Oliveros. Zachary has received commissions from Cornish College of The Arts, The Microscores Project, the Beam Foundation, sfsound, The Living Earth Show, Kronos Quartet and the Seattle Chamber Players among others. His 2006 composition Suite for String Quartet was awarded the Paul Merritt Henry Prize for Composition and has subsequently been performed at the Labs 25th Anniversary Celebration, the Labor Sonor Series at Kule in Berlin Germany and in Seattle Wa, as part of the 2nd Annual Town Hall New Music Marathon featuring violist Eyvind Kang. Zachary has performed in numerous festivals across the United States, Mexico and Europe. Zachary releases music on the labels Sige, Cassauna, Confront (UK), The Tapeworm and Touch (UK). Novembre Magazine (DE), ITCH (ZA), Walrus Press and the New York Miniature Ensemble have published his writings and scores. Zachary has been an artist in resident at the Espy Foundation, Djerassi and the Headlands Center for The Arts.

About Soundwave Next
Soundwave NEXT is a partnership between Gray Area and Soundwave SF, two veteran San Francisco arts organizations to explore the future of sound. The program invites curators, artists, producers, or collectives to present new performance-based works or productions based in sound.
For nearly two decades, Soundwave has provided a platform for artists to explore sound and create immersive experiences that captivate, inspire and challenge our own experience and reality. Throughout that time, Gray Area has become a leading institution in using art and technology for civic and social impact.
Co-produced by Gray Area and Soundwave Next.