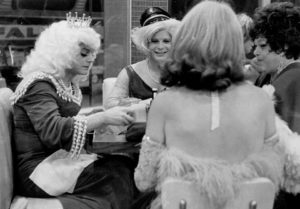 Three years before the Stonewall uprising in New York, the August 1966 riot at Compton’s Cafeteria in San Francisco’s Tenderloin district occurred when drag queens and transgender women fought back against police harassment. A watershed moment in LGBTQ history that was almost forgotten, the riot was rediscovered by researchers in the GLBT Historical Society’s archives decades later. This event, co-presented with the Tenderloin Museum, will commemorate the riot with a screening of Susan Stryker and Victor Silverman’s 2005 documentary “Screaming Queens.” The screening will be followed by a panel discussion featuring historians, activists and Compton’s veterans who will reflect on the history of this uprising in light of the ongoing problem of police violence and consider how communities can mobilize in response. The event will also include discussion of the play “The Compton’s Cafeteria Riot,” a 2018 theater piece commissioned by the Tenderloin Museum. SPEAKERS Collette LeGrande is the twice former Grand Duchess of the Ducal Court of San Francisco. She has raised funds for charity in the Tenderloin for 30 years, supporting the AIDS Emergency Fund, Magnet, Mama Reinhardt’s Toys for Tots, and many others. She has worked at Aunt Charlie’s since 1998 and organizes her own bi-weekly drag show, the Dream Queens Revue. She is the co-author of the Tenderloin Museum’s play The Compton’s Cafeteria Riot. Donna Personna is an artist and performer who first hit the stage with the legendary Cockettes. She was the subject of the 2013 Iris Prize-winning short “My Mother,” by Jay Bedwani. She serves on the board of directors’ committees for Trans March and the Transgender Day of Remembrance, working to gain wider visibility for transgender rights. She is the co-author of the Tenderloin Museum’s play The Compton’s Cafeteria Riot. Susan Stryker is Associate Professor of Gender and Women’s Studies, as well as the former director of the Institute for LGBT Studies at the University of Arizona. She is the author of many articles and several books on transgender and queer topics. She won a Lambda Literary Award for the anthology “The Transgender Studies Reader” (Routledge, 2006) and an Emmy Award for the documentary film “Screaming Queens: The Riot at Compton’s Cafeteria” (Frameline/ITVS, 2005). Shane Zaldivar (they/them/their/theirs) has been living in San Francisco for four years now. Since they moved out of Florida to attend Oaksterdam University, drag in the Bay area has become their art therapy. For Shane, the performer community invites authenticity to shine way beyond the stage. They feel lucky to be a part of the community to showcase fun and genuine expression. Shane originated the role of “Rusty” (who is based on Donna Personna) in The Compton’s Cafeteria Riot play. HOW TO PARTICIPATE This event will take place online. After you register, you will receive a confirmation email with a link and instructions on how to join the Zoom webinar as an attendee. The event will also be livestreamed on our Facebook page at https://www.facebook.com/GLBTHistory/ and then archived on our YouTube page at https://bit.ly/2UyGVbG. ADMISSION Free | Suggested donation of $5.00 Register online here: https://bit.ly/3gCedyX The event is limited to 500 attendees. ASL INTERPRETATION ASL interpretation provided upon request. Please write at least three days in advance of event to leigh@glbthistory.org. JOIN THE GLBT HISTORICAL SOCIETY Become a member of the GLBT Historical Society for free museum and program admission, discounts in the museum shop and other perks: www.glbthistory.org/memberships Image credit: Inside Gene Compton’s Cafeteria in San Francisco’s Tenderloin neighborhood, ca. 1966; photo by Henri Leleu, Heri Leleu Papers (1997-13), GLBT Historical Society.
+ Google Calendar+ iCal Export