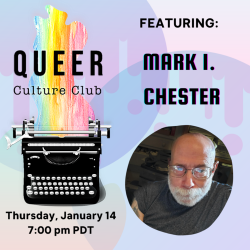 Our new program series in 2021 is the “Queer Culture Club,” a monthly series on the second Thursday of each month that focuses on LGBTQ people who are defining the queer culture of yesterday, today and tomorrow. These programs feature GLBT Historical Society executive director Terry Beswick as he interviews queer culture-makers, including authors, playwrights, historians, activists, artists and archivists, to learn about their work, process, inspirations, hopes and dreams. In this first installment, cosponsored by the LEATHER & LGBTQ Cultural District, legendary San Francisco gay “radical sex” photographer Mark I. Chester will discuss his forthcoming new book of contemporary photography, Street Sex Photos (2021). The book documents gay men’s sexual lives in the South of Market district of San Francisco in an era when the neighborhood was, in Chester’s words, “like a giant supermarket of the sexual underground.” SPEAKERS Terry Beswick (he/him/his) has served as executive director of the GLBT Historical Society since 2016. At the height of the HIV/AIDS epidemic in San Francisco, he was a founding member of the local ACT UP and was the first national coordinator of ACT NOW, the national AIDS activist network. He advocated for HIV/AIDS research and treatment with Project Inform, the Human Rights Campaign and the White House Office of HIV/AIDS Policy. After the advent of effective treatments for HIV, Beswick worked as a journalist for the Bay Area Reporter and other LGBTQ community publications. More recently, he spearheaded a successful campaign to save and renovate the Castro Country Club for the queer recovery community and cofounded the Castro LGBTQ Cultural District. He holds an MFA in playwriting from San Francisco State University. Beswick served as a Community Grand Marshal for the 50th Anniversary San Francisco LGBTQ Pride Parade and Celebration in 2020. Mark I. Chester (he/him/his) is a gay radical sex photographer whose fine art featuring sexual content has documented his life in San Francisco’s South of Market district since the late 1970s. His work is sexually explicit, politically provocative, socially conscious and artistically taboo. His work continues to break down barriers among normally exclusive genres of art including fine art studio portraiture, social documentary work, explicit sexual art and street photography. His book Street Sex Photos will be officially released on January 20, 2021. ABOUT THE LEATHER & LGBTQ CULTURAL DISTRICT The LEATHER & LGBTQ Cultural District works to preserve and enhance the vitality of San Francisco’s kink and queer communities in SoMa. For more information, click here: https://sfleatherdistrict.org/. HOW TO PARTICIPATE This event will take place online. After you register, you will receive a confirmation email with a link and instructions on how to join the Zoom webinar as an attendee. The event will also be livestreamed on our Facebook page at https://www.facebook.com/GLBTHistory/ and then archived on our YouTube page at https://bit.ly/2UyGVbG. ADMISSION Free | Suggested donation of $5.00 Register online here: https://glbthistory.ticketing.veevartapp.com/tickets/view/list/queer-culture-club-street-sex-photos-with-mark-i-chester. ASL INTERPRETATION ASL interpretation provided upon request. Please write at least three days in advance of event to leigh@glbthistory.org. JOIN THE GLBT HISTORICAL SOCIETY Become a member of the GLBT Historical Society for free museum and program admission, discounts in the museum shop and other perks: www.glbthistory.org/memberships
+ Google Calendar+ iCal Export