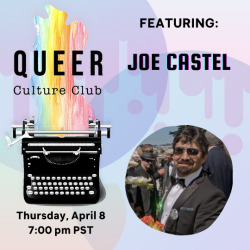 GLBT Historical Society Executive Director Terry Beswick will interview director, producer, screenwriter and playwright Joe Castel, whose body of work explores Latinx and LGBTQ history and identity. Castel will also discuss his newest documentary, Nelly Queen: The Life and Times of José Sarria (2020), which will be screened immediately following the interview (see the separate event listing for the screening). This is the April installment of “Queer Culture Club,” our monthly series each second Thursday that focuses on LGBTQ people who are defining the queer culture of yesterday, today and tomorrow. Each month, Beswick interviews queer culture-makers, including authors, playwrights, historians, activists, artists and archivists, to learn about their work, process, inspirations, hopes and dreams. Note: the discussion and the film screening are ticketed as two separate events, so please register for each event if you wish to attend both.

Joe Castel (he/him) is a producer, screenwriter and playwright whose work has explored Latino and LGBTQ history and identity for over 20 years. His documentary Nelly Queen: The Life and Times of Jose Sarria (2020) opened the Long Beach Q Film Festival in 2019 and won the Audience Award for Best Feature Film. Since then, it has streamed at Los Angeles Outfest, Fresno’s Reel Pride and the Winnipeg Film Festival. Castel’s other film and theater credits include Recordar, a documentary about his family’s immigration from Mexico to Illinois; the play The Blvd, which received critical recognition in its six-week run in West Hollywood; and the feature-length screenplay Hero Street, which relates the true story of eight Mexican-American war heroes and was awarded a Corporation for Public Broadcasting development grant.

Terry Beswick (he/him, moderator) has served as executive director of the GLBT Historical Society since 2016. At the height of the HIV/AIDS epidemic in San Francisco, he was a founding member of the local ACT UP and was the first national coordinator of ACT NOW, the national AIDS activist network. He advocated for HIV/AIDS research and treatment with Project Inform, the Human Rights Campaign and the White House Office of HIV/AIDS Policy. After the advent of effective treatments for HIV, Beswick worked as a journalist for the Bay Area Reporter and other LGBTQ community publications. More recently, he spearheaded a successful campaign to save and renovate the Castro Country Club for the queer recovery community and cofounded the Castro LGBTQ Cultural District. He holds an MFA in playwriting from San Francisco State University. Beswick served as a Community Grand Marshal for the 50th Anniversary San Francisco LGBTQ Pride Parade and Celebration in 2020.

This event will take place online. After you register, you will receive a confirmation email with a link and instructions on how to join the webinar as an attendee. The event will also be livestreamed on our Facebook page at https://www.facebook.com/GLBTHistory/ and then archived on our YouTube page at https://bit.ly/2UyGVbG.

Become a member of the GLBT Historical Society for free museum and program admission, discounts in the museum shop and other perks: www.glbthistory.org/memberships