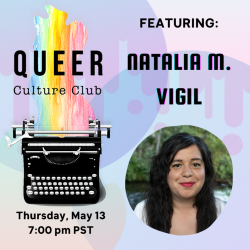 GLBT Historical Society executive director Terry Beswick will interview queer Xicana writer and multimedia curator Natalia Vigil, who recently assumed the position of executive director of the Queer Cultural Center. She will discuss her new position, her work and her involvement in the upcoming 2020 Queer Arts Festival. This is the May installment of “Queer Culture Club,” our monthly series each second Thursday that focuses on LGBTQ people who are defining the queer culture of yesterday, today and tomorrow. Each month, Beswick interviews queer culture-makers, including authors, playwrights, historians, activists, artists and archivists, to learn about their work, process, inspirations, hopes and dreams.

Natalia M. Vigil (she/her/hers) is a queer Xicana writer with native heritage, a multimedia curator and a big sister of six, born and raised in San Francisco. She is an arts administrator passionate about community-driven creativity and cultural preservation through artist sustainability. She currently serves as executive director of the Queer Cultural Center of San Francisco, and is the cofounder of Still Here San Francisco, an intergenerational cultural-preservation project amplifying the voices and creativity of LGBTQ Black, indigenous and people of color raised in San Francisco. For her work with Still Here, she was honored as a Local Hero by the San Francisco Human Rights Commission.

Terry Beswick (he/him/his) has served as executive director of the GLBT Historical Society since 2016. At the height of the HIV/AIDS epidemic in San Francisco, he was a founding member of the local ACT UP and was the first national coordinator of ACT NOW, the national AIDS activist network. He advocated for HIV/AIDS research and treatment with Project Inform, the Human Rights Campaign and the White House Office of HIV/AIDS Policy. After the advent of effective treatments for HIV, Beswick worked as a journalist for the Bay Area Reporter and other LGBTQ community publications. More recently, he spearheaded a successful campaign to save and renovate the Castro Country Club for the queer recovery community and cofounded the Castro LGBTQ Cultural District. He holds an MFA in playwriting from San Francisco State University. Beswick served as a Community Grand Marshal for the 50th Anniversary San Francisco LGBTQ Pride Parade and Celebration in 2020.

This event will take place online. After you register, you will receive a confirmation email with a link and instructions on how to join.

Become a member of the GLBT Historical Society for free museum and program admission, discounts in the museum shop and other perks: www.glbthistory.org/memberships