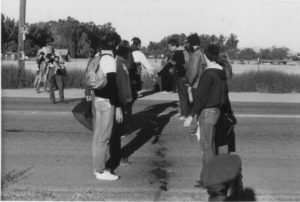 In September 1984, members of Enola Gay, a gay men’s direct-action affinity group, blocked the entrance to Lawrence Livermore National Laboratory during a large demonstration against the development of nuclear weapons. The activists poured real human blood at the entrance and chanted “money for AIDS, not for war!” This act of civil disobedience calling attention to government neglect in the face of a deadly epidemic has been described by one historian as “the first recorded instance of civil disobedience to confront AIDS.” To mark the 35th anniversary of the protest, Enola Gay members Robert Glück, Richard Bell and Jack Davis will share photographs and stories from the group’s history, discuss the shifting priorities for sexual politics during the 1980s, and reflect on direct action and intersectional organizing during the early years of the AIDS crisis. LOCATION The GLBT Historical Society Museum 4127 18th St., San Francisco https://www.glbthistory.org/museum-about-visitor-info ADMISSION $5.00 | Free for members Limited Seating: RSVP Required Get your ticket here: https://bit.ly/2GHTV7u ASL INTERPRETATION ASL interpretation provided upon request. Please write at least three days in advance of event to nalini@glbthistory.org. JOIN THE HISTORICAL SOCIETY Here’s where to become a member of the GLBT Historical Society: https://www.glbthistory.org/memberships SPEAKERS Richard Bell has been an activist since the antiwar movement in the 1960s and has participated in most social/racial/economic justice issues since then. Along the way he received a master’s in social work and had a career in public child welfare. He is currently working with El Cerrito Progressives on a variety of local issues, including police surveillance, immigration and the environment. Richard is pleased to have survived long enough to be “history.” Jack Davis, a former member of Enola Gay, is a visual artist, witch and activist. He has been engaged in political work for over 50 years and has been arrested several times for his involvement in causes such as antinuclear weapons, anti-intervention in Central and South America, anti-U.S. imperialism, and pro-AIDS research and funding. Robert Glück has served as director of San Francisco State University’s Poetry Center, co-director of Small Press Traffic Literary Center, and associate editor at Lapis Press. His books include two novels, “Jack the Modernist” and “Margery Kempe”; two books of stories, “Elements” and “Denny Smith”; a book of poems and short prose, “Reader”; and, with Kathleen Fraser, a book of prose poems, “In Commemoration of the Visit.” Most recently, Glück published “Communal Nude: Collected Essays and Parables,” an editioned artist book with Cuban artists Jose Angel Toirac and Meira Marrero Díaz.
+ Google Calendar+ iCal Export