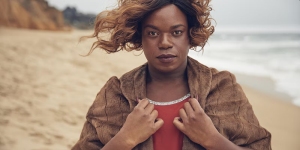 Powerhouse vocalist Tory Teasley perform for Land and Up in Arms.

Ms. Tory Teasley The most up-and-coming FUNK & SOUL vocalist in the Bay Area! An Oakland Native – with a power in her voice that vibrates the room, uplifting and resonating with an entire audience. Stop dancing? Yeah, right. Celebrate the night away with this spectacular performer who will leave a profound impression on your soul. Let’s do it with PRIDE!

Tory Teasley describes her sound as ‘eclectic with jazz roots’. Her songs represent a broad range of genres from neo-soul, funk, and R&B to blues, classical, and gospel. Tory credits several musicians, including Chaka Khan, Patti LaBelle, Erykah Badu, Luther Vandross, Ledisi, Aretha Franklin, Donny Hathaway, and Jimi Hendrix as her main musical influences. Regardless of her role and evolution in the arts, Teasley strives to uphold the message of no boundaries or limits when it comes to creative expression.

Tory Teasley, Lead Vocalist was born and raised in the suburbs of East Bay California. From an early age, it was clear that Teasley was a born musician. She started playing the violin and cello before she entered elementary school and was acting by age seven. She regularly sang at her church during adolescence, which eventually led her to the Berkeley Jazz School where she studied classical music. At age 10, she had her first paid gig traveling with Opera Picallo for four years and was also under the tutelage of neo-soul phenomenon, Ledisi, along with world-renowned jazz musician, Raz, between ages 13 and 18.

Alongside a list of accolades, Tory often performs at UC Berkeley with Oakadelic and carries an artist residency with the Queer Arts Center (beginning June 13th on Sundays). She has opened for both the SF Mayor London Breed at City Hall and 2X Grammy-winning artist Fantastic Negrito! In 2018, she even released her first album with Tory and the Teasers, “Free Tory: Be Yourself, Love Yourself, Free Yourself” (available on most streaming and downloading websites like Spotify and iTunes). Her vibrancy shine-shine-shines on stage.