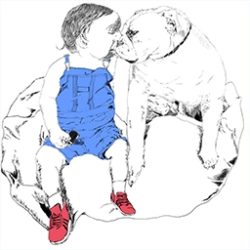 In celebration of Bitchin’, our new exhibition celebrating the dog-themed art and canine companionship, Creativity Explored will host a unique panel discussion about the representation and prominence of dogs in artistic, historical, and social contexts. Symbols of loyalty and reflections of wealth, dogs throughout art history occupy an overwhelming presence in art and social relationships. The discussion will consist of commentary of these phenomenons and the contemporary outcome of these artistic trends by three expert panelists. Join us on Thursday, May 23 for The Artist’s Best Friend: Dogs, Companionship & Inspiration — a free panel discussion hosted in partnership with Bark Magazine. The panel will be moderated by Cameron Woo, co-founder and publisher of Bark Magazine. Panelists include scholar and author Dr. Thomas Laqueur (UC Berkeley), author and animal welfare leader Carol Novello (President, Humane Society of Silicon Valley), and artist and animal rights activist Stacy Tang. Be sure to check out Bitchin’ in the CE gallery to enjoy dog-themed artwork by over two dozen CE artists. Bring your pup so they can enjoy our mini-exhibition mounted at dog eye-level, including artwork celebrating favorite canine things. About the Panelists & Moderator Dr. Thomas W. Laqueur Laqueur is the Helen Fawcett Distinguished Professor Emeritus at the University of California, Berkeley. His work has been focused on the history of popular religion and literacy; on the history the body— alive and dead; and on the history of death and memory. He writes regularly for the London Review of Books and the Threepenny Review, among other journals and is a founding editor of Representations. Laqueur is a member of both the American Philosophical Society and the American Academy of Arts and Sciences but is most proud of the Mellon Distinguished Humanist Award, the proceeds from which he used as seed money for programs in religion, human rights, and science studies at Berkeley—all of which are now self-sustaining. His most recent book is The Work of the Dead: A Cultural History of Mortal Remains (Princeton 2016) which was featured in his NPR interview with Terry Gross, December 15, 2015. His current research is on the history of humanitarianism and on dogs in western art. Carol Novello Carol Novello is the author of Mutual Rescue: How Adopting a Homeless Animal Can Save You, Too (Grand Central Publishing, April 2019.) She is also president of Humane Society Silicon Valley, the first shelter in the country to meet all guidelines put forth by the Association of Shelter Veterinarians. In addition, she founded Mutual Rescue, a national initiative to change the conversation from “people OR animals” to “people AND animals.” Prior to entering the field of animal rescue, Carol was a senior executive at software maker Intuit. Carol earned her MBA from Harvard Business School and her BA in English and economics from Dickinson College. Her family includes several rescue animals.﻿ Stacy Tang Stacy Tang is an interdisciplinary artist based in the San Francisco Bay Area. She is Adjunct Art Professor at both the Illustration program of the California College of the Arts and the Animation/Illustration program of the San Jose State University. Her professional work include Visual Effects matte painting and concept art for films and games. She also runs an ongoing illustration project about animal rescue and adoption that can be viewed at www.mydirtypaws.com. Cameron Woo (Panel Moderator) Cameron Woo is the co-founder, publisher and creative director of The Bark and thebark.com, the voice of dog culture. He also co-edited the anthology Dog Is My Co-Pilot and authored Photobooth Dogs.
+ Google Calendar+ iCal Export