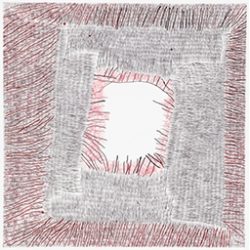 Take a lovely stroll with us through the new exhibition by Creativity Explored with show curator and teaching artist Ajit Chauhan and CE collector and curator Lawrence Rinder.

The duo will dive into the artwork included in The park “a darling walk for the mind” and discussing their curatorial approaches to Creativity Explored artists.

Both Chauhan and Rinder bring unique yet overlapping perspectives to the artwork included in the show – Chauhan recently joined the CE staff in 2019 and attributes elements of the show to a process of discovery. Rinder is a long-time CE supporter, collector, and curator of the traveling Create exhibition that started at UC Berkeley Art Museum and Pacific Film Archive (BAMPFA) in 2011, touring the US through 2015 and drawing acclaim from lovers of outsider and contemporary art alike.
Join us on Thursday, August 6 starting at 1:00 PM (PDT) to discover even more and learn about the featured artists in the exhibition. After a short discussion, the pair will take live questions from the audience.

RSVP is required on Eventbrite to receive the access link. The program will take place on Zoom.

Before the event, take our five-minute virtual tour of the exhibition (below), narrated and edited by show curator Ajit Chauhan. Be sure to check out Rinder’s article in Raw Vision Magazine about CE artist Evelyn Reyes, who is featured in the exhibition.

The park “a darling walk for the mind” is on view on the Creativity Explored Artsy Page through September 3. Artworks are available for sale with 50% of proceeds benefiting the artist directly.

Lawrence Rinder is the former Director and Chief Curator of the UC Berkeley Art Museum and Pacific Film Archive (BAMPFA). Previously, he was the Anne and Joel Ehrenkranz Curator of Contemporary Art at the Whitney Museum of American Art where he organized exhibitions including “The 2002 Biennial.” Prior to the Whitney, Rinder was founding director of the CCA Wattis Institute for Contemporary Arts, in San Francisco, and served as Assistant Director and Curator for Twentieth-Century Art at the BAMPFA. His play, “The Wishing Well,” co-authored with Kevin Killian, premiered in 2006 and he is the author (with Colter Jacobsen) of the photo-text novella, Tuleyome (Publication Studio, 2011).

Ajit Chauhan lives in the sanctuary city of San Francisco. He reads a lot, listens to music, plays with cats, and practices tai chi. He is part of a small collective of poets and painters “SF’s #1 Gallery! ‘Right Window'” as forever member Kevin Killian would say. Chauhan joined the Creativity Explored staff in 2019 as a Substitute Teaching Artist and co-facilitates the Imaginate@home public program. You can view Ajit’s website here.