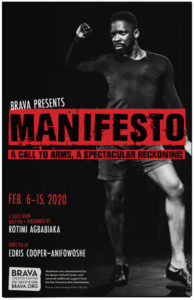 A call to arms, a spectacular reckoning, MANIFESTO is Rotimi Agbabiaka’s latest solo play, in which you the audience (and a cast of historical iconoclasts) will help a young artist create a manifesto for a 21st century theatre of liberation.

A sequel to the hit show, Type/Caste, MANIFESTO is a portrait of a young artist at a crossroads. As the entertainment industry extends a welcoming hand, this previously excluded queer, black actor must decide whether to pursue the trappings of mainstream success or remain an outsider artist on the road less traveled. While our protagonist ponders the role of theatre in a mad mad world, a chorus of creative ancestors, including James Baldwin, Nina Simone, and Fela Kuti, stop by and guide the young artist toward the visionary ambition of a manifesto.

MANIFESTO speaks, sings, and screams its way to an art form capable of taking on the unhinged forces of racist, fascist, capitalistic foolishness … and winning. Come prepared to take a stand.

TICKETS
$25 in advance and at the door (no fees for online or in person purchases)
*Sliding scale tickets available for Thursday, February 6 preview performance and Monday, February 10 performance.