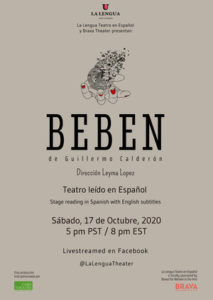 Performed in Spanish with English subtitles.
To read about this performance in Spanish, please click here.

On October 17 – the 31st anniversary of the Loma Prieta earthquake – La Lengua Teatro en Español presents Beben (which in German translates as “to quake; to tremble”) for the first time in the US. Set in Chile in 2010, Beben chronicles the experience of four volunteers from an international NGO who join a camp to help the victims of a catastrophic earthquake and tsunami. The crisis forces the four to confront the social and political effects of trauma, the role of religion, and the desperate need of state and government relief that arises during natural disasters like these when everyone must adjust to a new normal.

Written by the prominent Chilean playwright Guillermo Calderón, Beben is based on a story called “Earthquake in Chile” by Heinrich Von Kleist about a similar earthquake in Chile in 1647. When the NGO volunteers confess to Anna that they have told Von Kleist’s particularly cruel story to the children in the camp, all are forced to reflect on the motivations of their behavior.

This contemporary piece questions what change looks like in today’s politically and ecologically fragile society. If the map around us changes after a natural disaster, shouldn’t the way we treat each other change, also? Maybe not.

Beben was commissioned to Calderón by the Düsseldorfer Schauspielhaus. It was originally written inSpanish and translated to German by Hedda Kage.

*To view the Live Stream, “like” La Lengua Teatro en Español on Facebook and then tune in five minutes before the start of the event.