18 Reasons: Flavors of Catalonia: Recipes from Can Roca 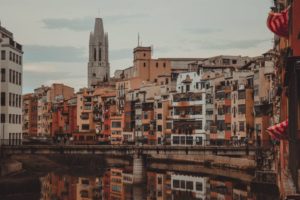 A hands-on cooking class culminating in a family-style dinner served with wine and beer.

We’re happy to have Camila back in our classroom; though she left the Bay for Barcelona a few years ago, she makes time to share a menu and a story with our community whenever she’s in our area. This menu features traditional Catalonian dishes, inspired by a recent trip to Can Roca, an unassuming restaurant on the outskirts of the city of Girona.

If Can Roca rings a bell in your head, it might be because El Celler de Can Roca has been ranked the best restaurant in the world three times in the last few year and recently, their pastry chef was named the best in the world. The three Roca brothers were literally born into a family restaurant, Can Roca, which the parents still run. Though the sons have taken traditional dishes to new heights, their parents’ restaurant is still bustling. “De tota la vida” as the Catalans say, which roughly translates as “as it’s always been.” Traditional, good. This menu is an example of their traditional Catalan dishes, which inspired a new generation to create the best restaurant in the world