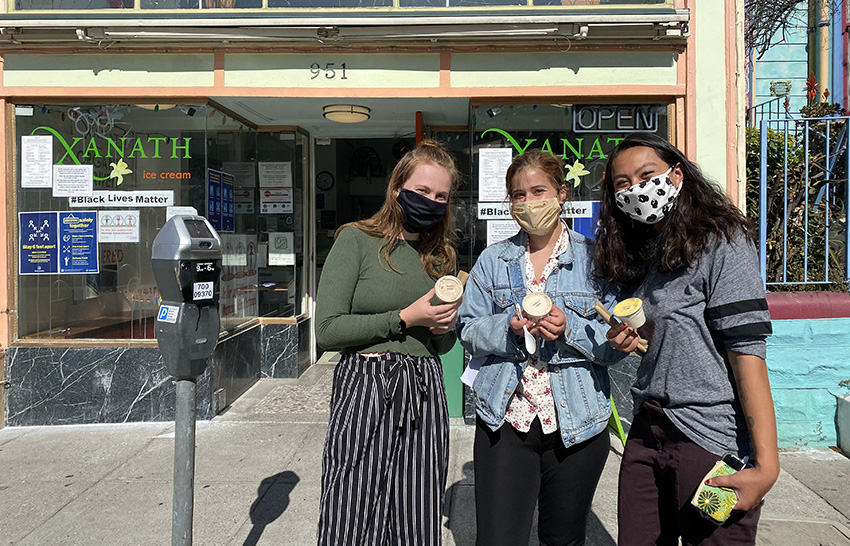 As July bleeds into August, I’m pleased to note the dreary mornings burn away faster.

Today’s exceptional weather demanded an appropriate destination for my dessert.

For the past two months, I’ve been drawn to Garden Creamery, a bright-pink beacon in a drab oasis. But each time I’ve approached the bubblegum storefront, it’s been closed.

My conundrum continued to plague me until someone in my office remarked that Garden Creamery was only open slightly later in the afternoons. Today was the day.

With two colleagues and my editor in tow, my excitement mounted when I spotted a small line on the sidewalk. At last.

In my anticipation, I missed the warning signs: the lack of menu signage, none of the customers were walking away with cups or cones, the front of the shop didn’t have a display case.

I asked what flavors were most popular right now, and the news was disappointing.

Read: San Francisco Ice cream is all about Straus Dairy

All they were offering were pre-orders of packed pints and dairy-free double scoops. And all they had in stock right now was their chocolate flavor. No cantaloupe, no matcha, no ube.

I turned away and relayed the tragedy to my co-workers. But this weather couldn’t be wasted.

We forged on to Xanath Ice Cream, just up the street on Valencia. Its neon ice-cream-cone sign was illuminated and, peering in from the sidewalk, I could see a clear plastic display case.

Only one customer is allowed in at a time, and everything is pre-packed into 4-ounce cardboard cups with plastic lids. I debated between blueberry, roasted almonds with honey, or saffron.

The most popular Xanath flavors — cookies and cream, Madagascar vanilla, and strawberry — felt too predictable for my goals. I wanted to be surprised.

I decided to go with Mexican cajeta, which had also had written in parentheses “dulce de leche.”

I like dulce de leche. My father used to boil cans of condensed milk in water to make his own version of it, which he’d often eat just with a spoon. He has more of a sweet tooth than me.

I purchased my prepacked cup, and the rest of my party did the same. Two got the saffron ginger, a beautiful golden yellow color, and the other got the roasted almonds with honey. 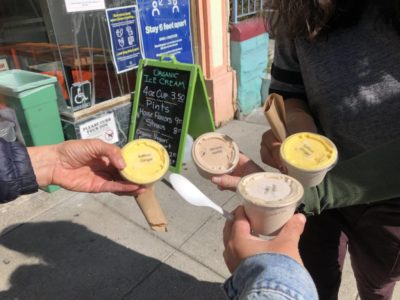 We pried open our lids and sampled our choices.

I was floored. Xanath? More like Xanadu. I make poor jokes when I’m caught off guard with unbridled joy. Even though it was an unplanned stop, it was clear now: fate had brought me here.

The texture was creamy, despite being slightly frozen, and packed in tightly, making it harder to “cut through,” as one of my co-workers observed.

The flavor was familiar, and yet something eluded me. It didn’t taste like the basic caramel, the sort of Werther’s Original taste that so many ice creams wind up reminding me of. Instead, I could taste the nuttiness of the milk, garnished by browning notes of sugar. Heaven. Still, there was something I couldn’t place. It nagged at me the more I ate, which I did slowly to savor my revelation.

My colleagues were equally impressed. The saffron ginger, was complex but not overpowering. One noted that the ginger hits first, a nice kick, followed by the saffron.

But the saffron wasn’t muted, my editor added; it’s still very present. She admitted it was better than she thought it would be.

My colleague was surprised that two such distinct spices worked so well together.

And my fourth taster, who ordered the roasted almonds with honey, said her choice was a nice surprise. Almond extract is really sweet, she explained, and she’d been a little nervous that this one would be too much. But it was the right balance, and had little almond chunks churned through for a nice, surprising texture.

We all agreed that, while it’s nice to get actual scoops (which usually wind up being more like a scoop and a half with how ice cream is served) the 4-ounce cups weren’t a bad deal for $3.50 each. The only downside was that it limited sizing options to the cup or a full pint.

My flavor still needled me when we returned to the office. After looking it up, I was surprised to learn that cajeta is different from regular dulce de leche because it’s made with goat milk. Even more impressed now, I made a mental note.

Summer still has another month left. I would be back.

Tough job, but someone’s got to do it. Support local news today.