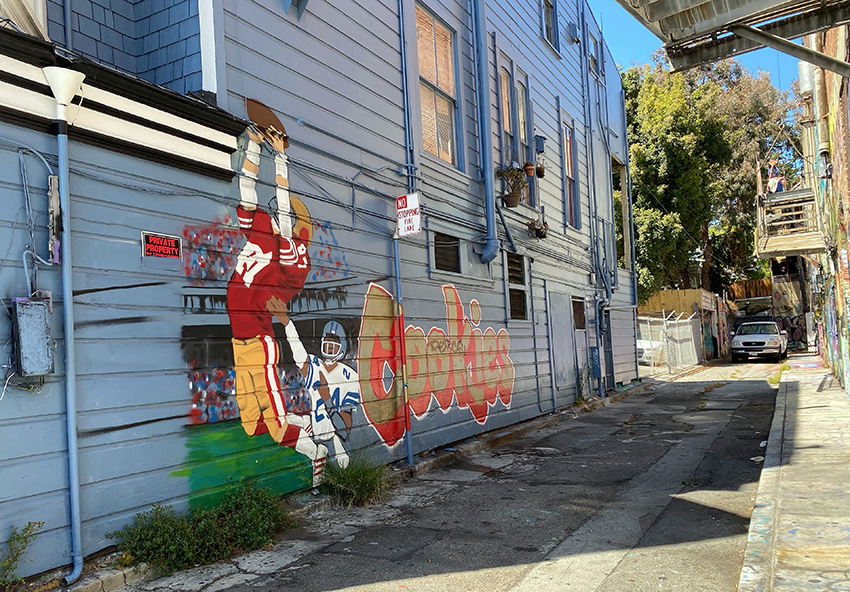 “The Catch”. Photo by Lydia Chávez

Six months into the pandemic, San Francisco hospitals continue to lag in providing the necessary personal protective equipment (PPE) to health care workers, the people who are most at risk and those on whom we are all most reliant.  SF is not alone. Yesterday, Bay Area health care workers joined a nationwide protest demanding more protective gear and increased staffing. Is it too much to ask?

Meanwhile, as the virus burns its way through the City, bringing more infections and deaths in its wake, City officials send mixed messages. While warning of hospital overloads, and blaming parties for the virus’ growth since Memorial Day, the City invites more partying on Valencia Street.

Scroll down for the numbers, which are somewhat brighter today.

We are reporting California and Bay Area numbers though they may be artificially low. As we’ve learned, there are at least two simple ways to bring down the case numbers. One is to stop testing. The other is to stop reporting.  Joe’s article yesterday on California numbers, is an example of the latter. Mostly this affects “new case” numbers which have consistently been late and fluid.  San Francisco data has not been affected by the state’s problems.

The best news to report today is the R number in SF has dropped to an estimated 1.14. Though an indicator the virus continues to spread, the rate, perhaps, is slowing. This is the first time since June 18, the R number has been this low.

Delays in obtaining test results mean the “more reliable” results come from a week ago. The seven day average for tests coming back positive on July 30 was 3.85 percent,  about where it’s been for the past couple weeks.

As of August 4, DPH reports 6 patients have departed Acute Care, which along with 2 fewer ICU patients bring the total number of COVID confirmed and suspected patients in SF hospitals to 98. This is the first time since July 15, hospitals have had fewer than 100 Covid patients. The rate of weekly change in COVID positive patients, for the week ending 8/4 has decreased by 15 percent.

Men outnumber women more than two to one. More than half of those who died were over 80.

No big changes here, though increased action from local residents and attention from officials should begin to bring these numbers down which would benefit everyone in the City.