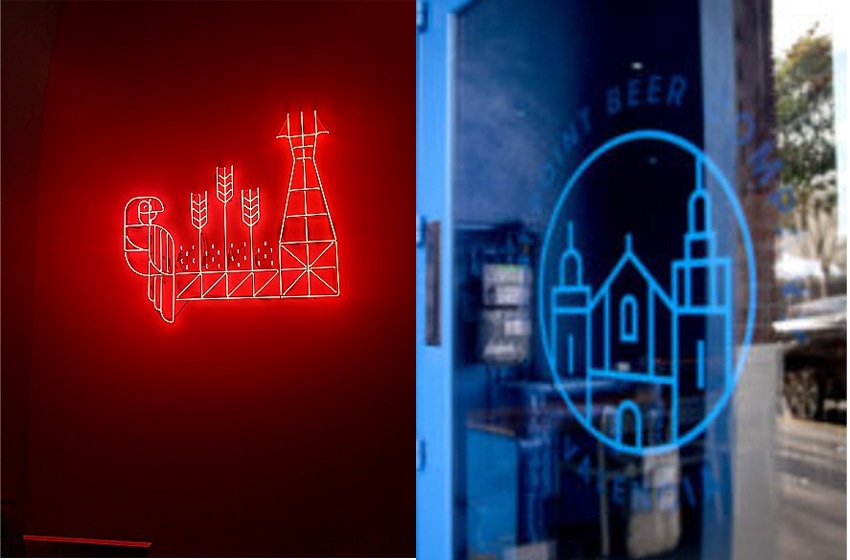 Fort Point is the Mission’s newest beer hall (and we have quite a few of them) and the tasting room/foodie offshoot of their Presidio mothership (the City’s largest independent brewery).  Named after the fort of the same name located beneath the Golden Gate Bridge, Fort Point also has a Ferry Building presence, and you can buy many of their brews at various bars around the City.

I’ve already espied their Galaxy Park, a Pale Ale (little bit hoppy, floral, with a hint of ruby grapefruit, to my untrained palate), at other locations here in the Mission. Fort Point Valencia offers 10 to 12 of their own brews on tap, as well as from other local breweries, including Black Sands, which Fort Point recently bought, so they’re keeping it all in the family.  There’s also a small list of California and Oregon wines.

But for me, the food here is the star, which you don’t always find in a brew pub.  Chef Eric Ehler has done a great job of taking well-known comfort/beer hall dishes and tweaking them, elevating them; he plays with genre and cuisines alike – especially Asian flavors, which lend themselves so well to tossing back brews.

The scene at Fort Point Valencia is scene-y, I’ll grant you, but it’s also quite casual.  The space is spare, white, warehouse-like (a bit cold, to me), with brightly painted accent walls and neon signage as the only real décor.  There are large tables for sharing in the back, and round, tall tables in the central area, as well as seating at the bar itself.

Five of us split a number of dishes.  First, pub fries with curry ketchup and garlic aioli. 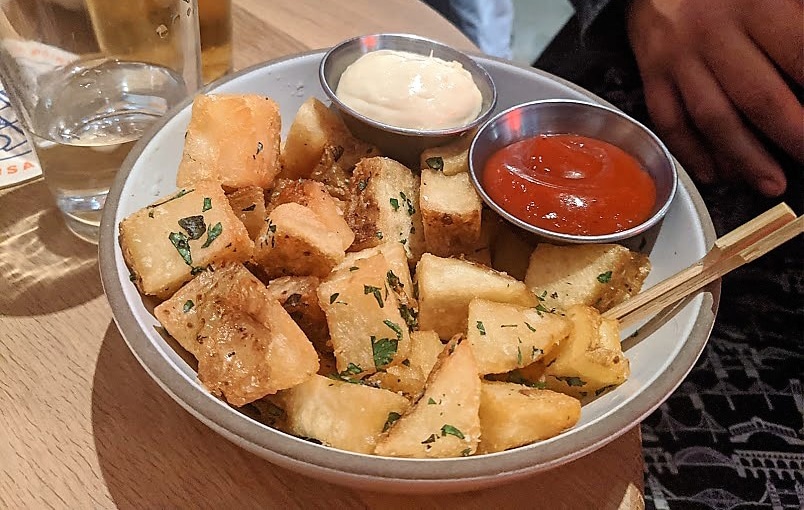 We had two orders of these crispy chunks of goodness.  They are substantial and yet light.  The closest thing to currywurst (without the wurst) I’ve had since Berlin.

Only two of us wanted the pork belly skewers, so we each got our own. 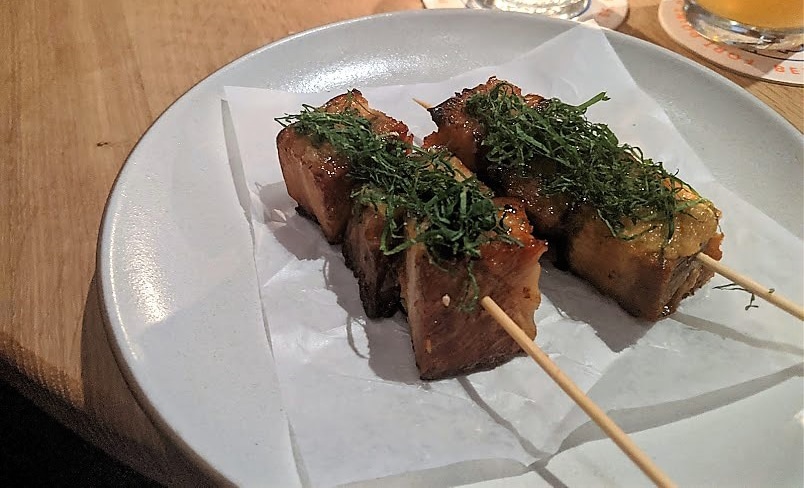 Grilled with yuzu and jalapeno kosho (a Japanese fermented chili paste), shiso, and fermented plum sauce, these were succulent and fatty, but turned out to be the most straight-forward dish of the evening. That’s saying something.  Still, pork belly.

Next up, Thai guacamole with taro and puffed rice chips. 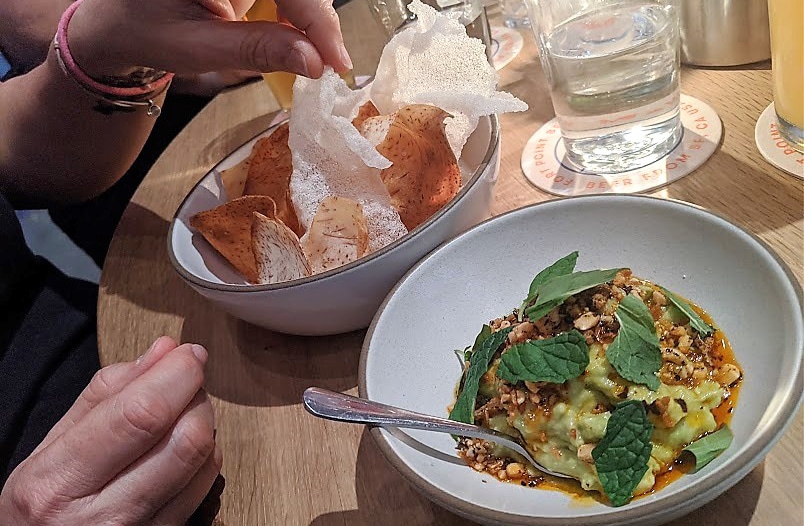 The guac comes drizzled with chili oil and a scattering of crushed peanuts and basil and is quite addictive.  And I don’t care if your mami don’t consider this guacamole – I consider it a winner.

“Hand” salad” was a bit of a puzzler. 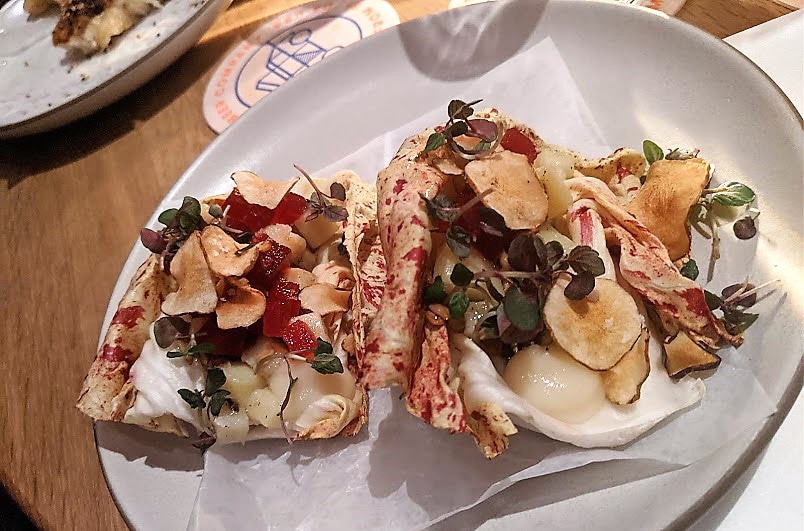 One gimmick at Ft. Point is that they serve their food without utensils unless you request them.  The salad – roasted sweet potato, sunchoke chips, pickled beets, parsnips and greens – was served on large radicchio leaves, and apparently made to be eaten “taco” style.  No small feat when you’re sharing with five people, but we managed.  But next time, I’d get a fork.  And yes, I’d have this again, as I loved the medley of flavors and textures.

“Party” bread comes in a couple of iterations, and one of our group asked for the smashed pumpkin version. 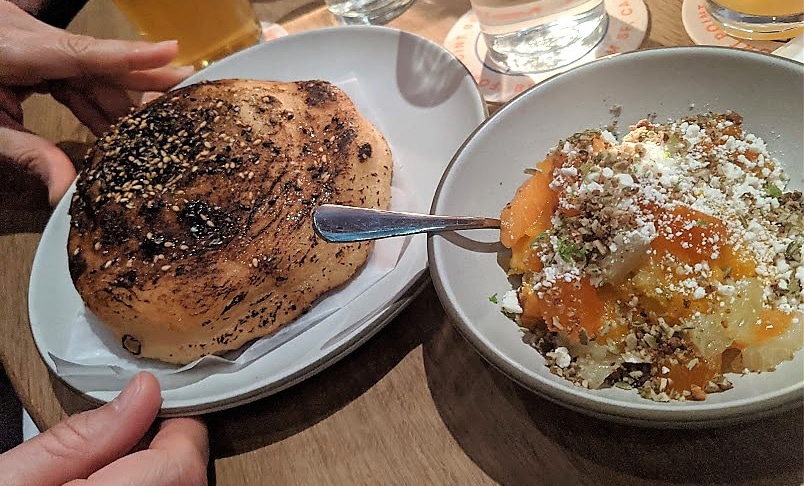 I had my doubts about this dish, but it was another standout.  The unleavened flatbread came puffy and a bit charred, crispy on the outside, fluffy on the inside, with a bowl of smooshed pumpkin, persimmons, pumpkin seeds, candied pecans, thyme, cinnamon, and salty cotija to spoon over it.  A feast of textures and flavors.  I don’t know what part of his heritage – Korea or Iowa  – Chef Ehler drew from for this wonder, but it worked on all levels. 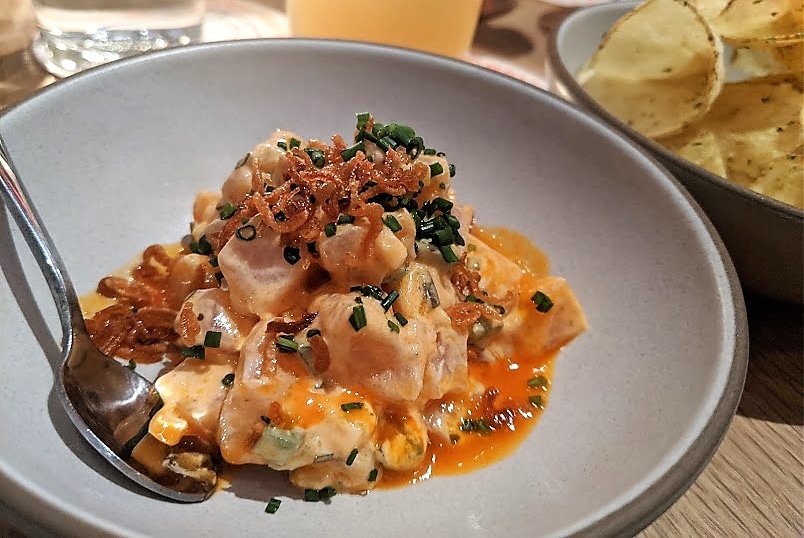 Oh my – again with the varying textures and ka-bam flavors, the beautiful boldness!  Hiramasa (yellowtail kingfish) bathed luxuriously in bonito mayo, smoked seaweed and Meyer lemon, topped with crunchy fried shallots, and strewn with ikura.  Probably my favorite of the night, and we should have had two of these.  You should have two of these. 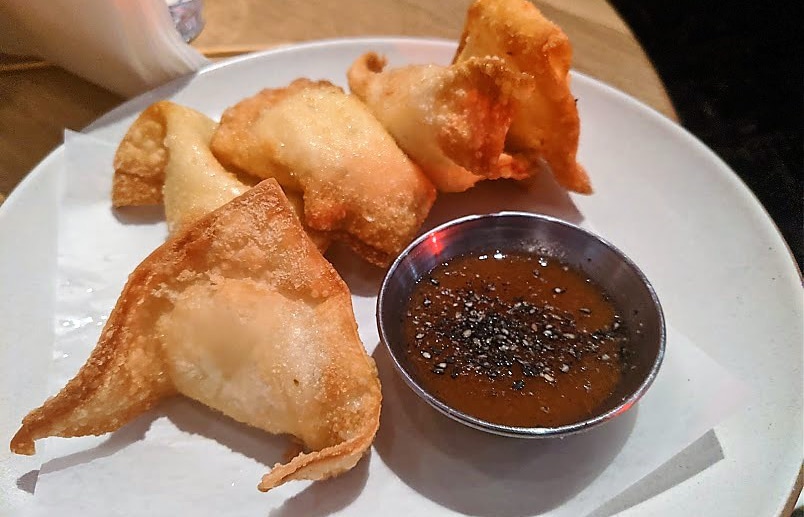 You think you know what to expect from this staple of pseudo-Chinese tiki bar food, that old Trader Vic’s stalwart.  But these fried puffs were ethereally light, crispy, and decadently creamy inside, and came with a fruity, black sesame oil dipping sauce.  Another must-have-again.

So, not a bad dish in the bunch.  I’m dying to go back and try the other Party Bread (with Sichuan hummus), the Shrimp Louie Toast, the pork chop sandwich, and, especially, the corned beef tongue, chicken liver, and egg salad on rye.

And I’ll try some more of their brews.  Or a glass of wine.  Or even – *gasp* – a non-alcoholic Casamara Club sparkling amaro soda (a tad bitter, not too sweet, and would have gone as well with a shot of something) that one of our group had.

The point is, you’ll come for the brews, but return for the eats.  I certainly will, especially if Chef Ehler continues to evolve his menu.