Distillations: The Virgin Mary takes up residence at the 24th Street Bar. And there was much rejoicing. 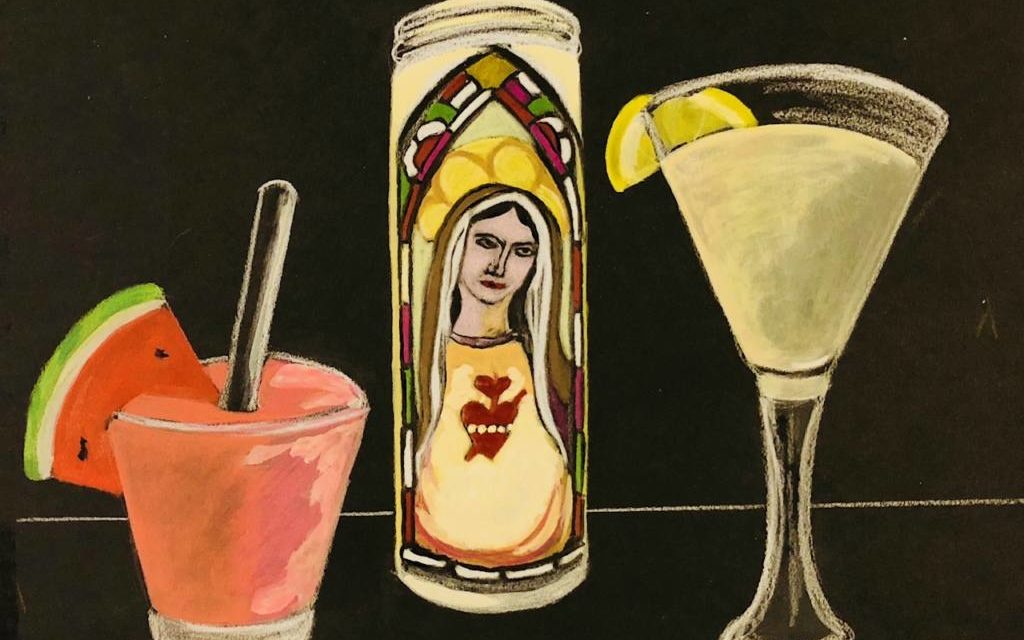 “Okay, look,” I asked Michael, the heavily bearded bartender at the 24th Street Bar, “I have to ask — I have to — what’s with the Virgin Mary theme?”

The 24th Street Bar in San Francisco has an okay beer list and an okay wine list, but it specializes in refreshing non-tiki drinks. Michelle stuck to beer all night, but the sign outside advertised an apple cider ginger whiskey cinnamon combination, and I wanted some of that.

We were telling each other stories about horrible life experiences we’ve had to climb out of — which is really hilarious in the right company — and absolutely nothing about the conversation in any way suggested The Virgin Mary.

She wouldn’t have come up at all, except that she was everywhere. Otherwise the 24th Street Bar is relatively standard fare: a long, L-shaped bar in a small room; dark; mirrors framed in wooden arches hanging on one wall; the two televisions turned to a ballgame. Nice, but in no way unusual … except for all the statues of Mary, mother of Jesus. I honestly haven’t seen so many of them in a bar before, ever. Not even in Mexico. Not even in the Vatican.

“Well, the owner is Cuban, and when she opened the bar, her mother insisted that she had to have a Virgin Mary on the bar … this one …” Michael gestured at a plastic bust with a light inside of it … “so that the space would be blessed. And the owner said okay, and she did it. And that’s the Lady of Guadalupe, who is the Mexican Virgin Mary, who heals the drought, which means she brings the booze.”

“Is the owner religious?” Michelle asked.

“No, but she’s practical,” Michael said. “Then, on a trip, she found Our Lady of the Lourdes, and liked her so much and had a perfect space for her, so since there was already one Virgin Mary she took her back and there she is now,” he gestures to the wall to our right. “The Lady of the Lourdes is the Italian Virgin Mary, she looks over the bartender Bernadette, and she brings healing water — which, again, is the booze. After that, they just kept coming. On the wall behind you, we have the Santa Crocia …” he gestures to an angel, her face and arms covered by her two wings, mounted on the wall between the bathrooms “… which is the Italian angel who looks over the bar distillers’ and bar owners’ tombs when they die. And in the two bathrooms and on our shelves, we have the Virgin Mary’s three angels, who look over people. Before you reach the bar, right over the door, illuminated in red, we have the Lady of Guadalupe again …” this statue is a full bodied representation … “who heals the drought. And right when you walk in, bathed in the blue the blue light of the ATM, is the angel of redemption, so she takes away all the demons and troubles when you come inside the bar.”

We take all this in for a moment.

“And, when did you start selling the candles?” Michelle asks, with a nod at the tall candles with images of the Virgin Mary on them, running the length of the L-shaped bar, so that they are literally in front of every seat. A sign on the liquor shelf announces that the candles are available at $2 a pop.

“That was kind of an accident,” Michael says. “They were just supposed to be decorations, but, she ordered way too many of them. Way too many. We’ve got boxes of them stacked on top of boxes of them in the back. So, we figured, why not sell them? They retail at $1.75 online, I figure a 25 cent convenience fee … why not?”

“And … how has this all been received around here?” Michelle asked.

“It’s turned out really well for us, actually,” he said, pleased with the miracle of it all. “People remember it, and they hear about it, and it sets us apart. It wasn’t something we did on purpose — at all — but it’s become who we are, and I wouldn’t have thought it would be popular around here, but, it really works.”

That sounds exactly right. By the time we leave, Michelle and I agree that we like just about everything about the 24th Street bar.

“I don’t understand people who try to create a bar without a theme!” she told me.

“Actually, what I hate are the people who create bars with hackneyed themes, themes they don’t even believe in or care about,” I said. “That creates a layer of bullshit artificiality that a bar can almost never recover from. What I love about this bar is the way it just settled in and let its theme emerge. That’s what happens if you focus on just making a really great bar and then letting things happen — with a little wear and time, your theme comes out naturally, there’s no bullshit, and it’s all the stronger for it.”

“As long as there’s room for inspiration,” she agrees. “That sounds right.”

But for all that we love the bar — and the drinks (when I asked what else they could do up special, the bartender replied that they do great things with fresh watermelon juice, and then gave me a watermelon/agave/tequila cocktail that I could have drank all night) — Michelle and I weren’t actually feeling very religious. In our discussion of life’s tribulations, we did not even consider asking for intercession. We had instead discussed the virtues of self-reliance, of inner strength, and of the need to own one’s own flaws and take a tragic view of life — even as one tries to stay emotionally open, even to the point of vulnerability.

We couldn’t think of a philosophy that really combined those elements properly, so we invented one. We call it: Cuddly Stoicism.

Go ahead and laugh. It covers all the essential bases. It’s how we think life should be lived.

I’d tell you more about it, but, we haven’t worked out the details yet: we’re planning to let them emerge, over time. That often works out so much better than a plan, by the grace of God, and if an angel flies through your door and takes up residence, so much the better.